This week’s featured antiquity is a remarkable late Roman glass pendant in the shape of a vase or juglet. It belongs to a class of decorative pendants and related objects that first appear in the Eastern Mediterranean in the mid-Third Century AD and evolve into a variety of types and forms into the Fifth Century AD.

Dating to the Fourth Century AD, this example measures just over one inch in height. It is an especially uncommon form of glass pendant featuring two handles. One handle is broken away in this example but the connection points are visible. In addition, this piece is shaped like a slender glass vessel rather than the more typically jug form. The body of this object is formed of a very dark brown or purple glass, appearing black, with a fine applied rim trail of light brown. The surviving handle appears to be formed of the same color glass as the body. A disc base has been separately applied. Incorporated into the body are slices from at least four glass beads or canes, including two eye beads in red and yellow and two composite slices featuring canes of alternating colors. 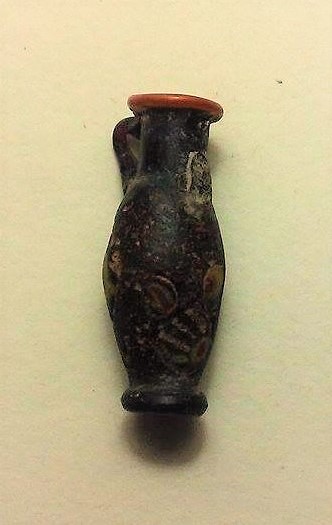 Objects of this type were made not be glass blowers but by bead makers. In fact, if one were to remove the small handle and open the foot of this object it would become a bead. The strong dark colors are typical of the revival of that palette among Roman glass makers beginning in the mid to late Third Century, as seen on both glass beads and glass vessels in the late Roman world.

While it has been suggested that this type of glass pendant may have had a Christian religious significance, there is no real evidence one way or the other. Another theory is that these were miniature scent bottles worn on the body. While finds of these objects seem to be concentrated in the Levantine region, with another substantial grouping in Egypt, suggesting they may have been manufactured in both locations, examples have been found in Southern and Central Europe and in Rome itself.

An excellent reference on this class of objects is Maud Spaer, “Ancient Glass in the Israel Museum, Beads and Other Small Objects” catalog #s 343-354 for several similar examples, and pages 170-173 for a detailed description of the general type.

Readers interested in acquiring this item may find it in our Etsy store here – https://www.etsy.com/listing/479831410/late-roman-glass-juglet-pendant-4th?ref=shop_home_active_1