This week’s featured object does not come from the Mediterranean, Classical or Near Eastern worlds but from Southeast Asia. It represents an important phase in Asian history in which China retreated from the world stage, leaving smaller kingdoms to fill the resulting gap in international trade.

In a Blog article earlier this month  (https://clioantiquities.wordpress.com/2016/10/01/distant-connections-contact-and-object-exchange-between-mediterranean-and-far-east-asian-civilizations-in-the-first-few-centuries-ce/) we explored recently unearthed connections between the Mediterranean world and East Asia, focusing on portable objects found many thousands of miles away from their points of origin. This week’s antiquity ties in well with that theme.

To put this object in context, it is worth reviewing the early years of China’s Ming Dynasty. The Ming were of true Chinese ancestry, unlike the previous Yuan Dynasty of Mongol origin. The third Ming Emperor, Zhu Di, asserted Chinese authority, from the Mongol regions to the north, the Tibetan Plateau to the east, Korea and Japan to the west and Southeast Asia. He was also responsible for assembling the vast naval flotilla of ocean-going ships that would sail under the Imperial Eunuch Zheng He, reaching points as far away as India, Yemen and the Middle East and even the east coast of Africa. Zheng He, despite being raised in the Imperial Court, was born Muslim in China’s southwestern Yunnan Province, a background that made him uniquely qualified to lead the famed “Seven Voyages.”

Despite great interest aroused by overseas expeditions, the Ming were facing difficulties with their expansionist policies. Attempts to subdue Japan and Vietnam proved costly and unsuccessful, while extravagance at home, including construction of the new Capital at Beijing and its Forbidden City, drained the state coffers. Conservative Confucian elements succeeded in reversing Ming internationalist policies, even banning construction of seagoing ships. Zheng He’s travel chronicles were officially condemned and forgotten. Export of Chinese products, especially much valued porcelain, dried up.

Stepping into the resulting market void were newly resurgent states, including the Kingdom of Ayudhya (also spelled Ayutthaya) in what is now Thailand. Conveniently for the Kingdom, the neighboring Khmer Empire (centered in what is now Cambodia) collapsed just as the last of Zheng He’s Seven Voyages was underway. Ayudhya and its predecessor Kingdom of Sukhothai, which became its vassal, were fortunate to be located in a region with converging river systems that provided the clay needed for pottery production and the transport system for exporting finished ceramics. With the Ming Chinese largely out of the trade picture, Thai ceramic artists produced great quantities of high-end celadon wares, underglaze wares, including blue floral underglaze wares to imitate Ming porcelains, and simple stonewares with thick glazes of brown or green. This week’s featured object belongs to this last category. These wares were produced at hundreds of known kiln sites around Sawankalok in Thailand’s north-central region. This has resulted in some confusion, with the place names, pottery types and phases becoming interchangeable, to include Sawankalok, Sukhothai and Sri Satchanalai (another location with a concentration of kilns). All of these ceramic types were widely exported, with finds not only throughout Southeast Asia but as far away as the Philippines to the west, Indonesia to the south and even the Islamic world. Our example was found as a burial offering in the Philippines in the early 1960s.

To learn more about this antiquity or to acquire it, visit our online stores – 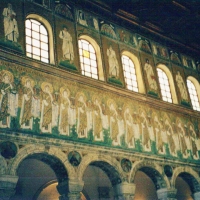