Many of the ancient oil lamps we offer at Clio Ancient Art are Byzantine, mainly from the Levant (what is now southern Turkey, Lebanon, Syria, Israel / Palestine). Unlike Roman hard fired ceramic red slip lamps of earlier centuries, Byzantine lamps tend to be made from low fired pottery and their designs often reflect early Christian symbolism. Our object of the week is the superb Byzantine pottery oil lamp shown above.

This object dates to the 6th or beginning of the 7th Century AD, just before the advent of Islam in the region. It was probably made in that part of modern Israel / Palestine that is often referred to as Samaria. It measures just under 4 inches in length and remarkably well preserved, with very crisp surfaces. It is formed of slightly pinkish buff clay and rests on a flat base. The upper surfaces are decorated in relief with alternating groups of vertical lines and stylized bunches of grapes inside circles. It has a small saddle shaped handle and more grape motifs on the nozzle and wick hole, which also has slight indications of carbon black from use.

On lamps of this type the large circular discus typical of earlier Roman lamps that had served as a kind of “canvas” for decorative images is gone. The decoration here is focused on the shoulders of the lamp. This rule applies to several classes of low fired pottery lamps produced during the very late Roman period, throughout the Byzantine period and into the early Islamic period in the Levantine region. The well preserved surface decoration on this example includes bunches of grapes, an early Christian motif suggesting rebirth. The same motif was widely used earlier in Roman iconography in association with Dionysus, the god of wine. 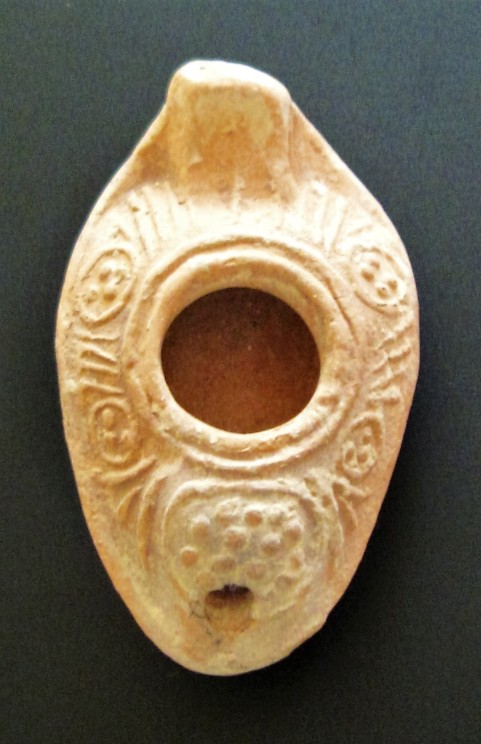 This lamp comes from a very large private collection assembled by a United Nations peacekeeping officer serving in Jerusalem in the mid-1960s. At the outset of the 1967 war, the collection was crated up and shipped to the United States, where his surviving relatives only opened the crates in 2012.

If you are interested in acquiring this object, which is modestly priced, you may find it on our eBay shop here (new tab or window) – http://www.ebay.com/itm/Superb-Byzantine-Pottery-Oil-Lamp-/131818636494?hash=item1eb100c4ce:g:rEQAAOxy69JTAkNE

There are a number of excellent online and print resources for ancient oil lamps, and especially for Levantine examples of this period. In print, we recommend: Rosenthal and Sivan, Ancient Lamps in the Schloessinger Collection, Jerusalem, 1978 (this is an older work and some issues pertaining to exact dates and locations of manufacture are still debated but overall still an excellent reference). Online, we recommend the RomQ Reference Collection (opens in a new tab or window): http://www.romulus2.com/lamps/index.shtml